Marketplaces unfurl. Unfurling here refers to the literal opening outwards, as well as the figurative achievement and revelation of a fully realized form as space or practice.

Each of the two photographs above shows different ‘galli markets’ in Chembur (a large district of many neighbourhoods in the north-eastern part of Mumbai city, situated within the M (West) Ward) that draw customers smoothly off the street. Like in many other Mumbai ‘suburbs,’ the street parallel to the railway line – from which one enters the Chembur suburban railway station – has turned into the main marketplace for a ‘catchment’ area extending a few kilometers especially to the south, east and west. The motorable street (18.30 m wide Right of Way), with footpaths on either side, is flanked by different kinds of commercial buildings with shops on the ground floor accessible directly off the street. But this is only the ‘spine’ of the practiced marketplace. If the practice of walking were to be mapped in aggregate, the ‘practiced’ marketplace would achieve its plan-form through the unfurling of what we may call ‘galli markets,’ off the main street. 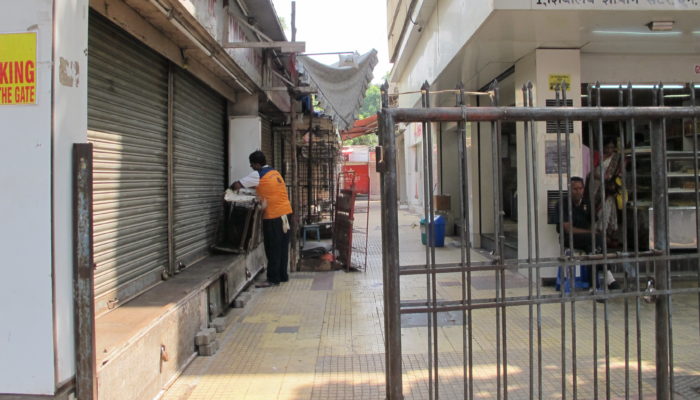 Most galli markets here are actually statutory marginal spaces left around an authorized multi-storey building, for enabling light, ventilation and the movement of vehicles. They are firmly private property, which has been released to the public realm of the abutting street. The markers of private property rights are variably present: the half closed gate in one photograph, for instance, is an unambiguous indicator, but there is no such in the other one. Over time, kiosks backing up against compound walls and lining the open spaces around authorized buildings against the grain of building codes, have turned private property into galli markets that are sometimes public thoroughfares and always extensions of the practiced public realm of the street.

A more literal unfurling, though extending ‘inwards’ into a frequented space, may also be read from one to the other photograph. Both galli markets have been photographed in the morning, before customers and passersby begin to throng the street. The gated galli market is empty of people, things and visual incident. An hour or so later, it will offer a different sight, especially as the shutters of the shallow shops along the compound wall open out, and sellers, goods, showcases, counters, start spilling out into the galli. The other photograph, taken around the same time at a different place, already shows the street beginning to unfurl an avatar – withdrawn for the night – of an intricately textured sensorium marked by dance-offs between yellows of marigold and flex signage, or the fragrance of flowers (sold early in the morning) and fruit juices.

Underlying the mappable instances above, can we consider ‘unfurling’ to be a key principle underlying the spatiality of the marketplace? Unfurling as an opening out and realization of potential, or as an expression of contained, withdrawn, or suspended interplays and conflicts, of intent, need and desire among other things? If so, what does such a temporalized view of the space of the marketplace – distant and etic though it may be in orientation and method involving photographs and thought experiments in mapping – imply for how we may conceptualise the city and its space? And, looking ahead to the field work yet to come, what would be the emic substance of such unfurling?